An Old Rocker Plugs Into The Future

He drives a big diesel truck and grew up driving old, cranky gasoline cars. Micke Elisasson from Östersund had never driven an electric car until he tried two at Winterwind.

Outside the conference hall there’s half a dozen electric vehicles (EVs) in a line, ready to be used by the participants. Micke Eliasson is not part of that crowd and he’s never been inside an EV before – but we have engaged him as a professional driver to hear his opinion.

A first look at the larger Nissan Leaf gives him a nice surprise:

”It looks real spacious inside the car. And hey – no dipstick, I like that!”

We drive along Rådhusgatan to Färjemansgatan in central Östersund, the cruise Micke Eliasson used to do as rocker (”raggare”) in the 70’s.

”I remember when I speeded down main drag with my two-stroke Saab and too much oil in the gasoline. I left a dark, oily cloud behind me,” he remembers.

Now he’s driving a zero-emission vehicle down the same roads. And it’s not a coincidence: Östersund and the other municipalities along E14 from Sundsvall to Trondheim is aiming to create a EV-infrastructure along the route.

One of the major partners is the utility Jämtkraft with head-office in Östersund.

The project is called Green Highway and one of the goals is that 15 percent of the vehicles on the highway will be electric by 2020.

Besides more EVs and charging stations, Green Highway is also working to create a greater awareness around the technology and trying to find suitable business models for charging and using electric cars.

”We also want to create a demo site where companies, politicians, academics and the general public can come and study how EVs can be a part of our future transportation system,” says Mikael Hagman, project manager electric mobility at Jämtkraft.

In Östersund there are already twelve charging stations, with a total of 34 charging points. There’s also a CHAdeMO direct current (DC) charger that can charge an empty EV battery (20–25 kWh) in 15-30 minutes.

Today you can ”fill up” your battery at, for example, Jämtkraft headquarters, a shopping mall, a car retailer, the Tourist Office and the local homestead museum. 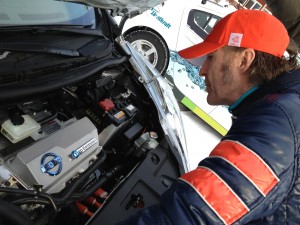 It takes some minutes for Micke Eliasson to find the socket and get a grip on the charging procedure.

”It’s easy, but it also feels strange to put a plug into a car,” he says with a grin.

After one hours drive with the Nissan Leaf and a smaller Peugot iOn he’s impressed:

”I’m grown up with the traditional combustion engine, but, hey – we live in the 21th Century and we should have come a longer way from my two stroke Saab. I wouldn’t mind going electric.”