Testing 150 Tonne Components At Minus 60°C

Surrounded by mist, ice-cold air and blue light, as the temperature declines a thin layer of frost is slowly building up on the transformer. It is subjected to a simulated winter, closely observed and subsequently analyzed.

A newly built climate chamber will help wind energy to become more profitable.
– Everything is accepted in Belgium, as long as it’s not on your own backyard, says the taxi driver when we leave Antwerp city center. And maybe he is right. We are on our way to Antwerp harbor to see the newly built OWI lab (Off-shore Wind Infrastructure Application Lab). The climate chamber is unique of its kind and the result of a costly three year project.
– The problem in Belgium is that we don’t have enough space to build wind power on land, so we began to build offshore. In the future, more and more wind turbines will be established in remote areas, says Pieter Jan Jordaens, project manager for OWI lab.

With a population of 340 inhabitants per km2, Belgium has the second highest population density in Europe. According to the national climate agreements, 13 percent of energy production should be generated by renewable sources. This is where OWI lab comes in. To maximize wind energy profitability in remote areas, you have to be able to trust that the turbines operate functionally. Here, wind turbine components with dimensions of up to 8 x 7 x 10 meters and with a maximum weight of 150 tonnes can be tested from +60 to – 60 degrees C to see how the materials behave in a controlled environment before using the technology in a real environment. Though their main focus is offshore, the aim is to enable profitable and operable wind energy everywhere from deserts to glaciers. 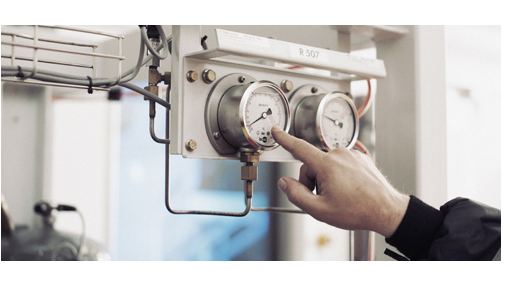 20 MW Turbines Not Far Away

To start with, gearboxes and transformers are tested, primarily for how the oil inside is affected by different weather conditions.
– When it is really cold the oil changes consistency and becomes viscous. In low temperatures, it is so thick it can hardly be considered a liquid anymore, says Jordaens.
OWI lab is special because of its ability to test heavy and large objects.
– That’s what makes it unique and valuable for wind energy, says Jordaens, but quickly adds that it will soon be too small. According to the enthusiastic engineer, 20 MW turbines are not far away.
– OWI is built to test components from wind power turbines up to 10 MW, so we are prepared the first few years.
The climate chamber construction was subsidized by the Flemish government but the initiative was taken by Sirris Technology Research Centre in cooperation with industrial partners and the Virje University in Brussels.