The risk of a piece of ice hitting a member of the public is relatively small. Nevertheless, ice throw is viewed as a real threat, which is consequently reflected in legislation and regulations. 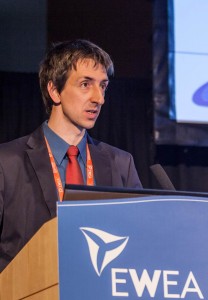 Andreas Krenn, project leader at Austrian wind energy consultants Energiewerkstatt, has studied the legislative frameworks and licensing practices related to ice throw in ten different countries. The study was funded by the Austrian Ministry for Innovation & Technology and has been elaborated within IEA Task 19, a research initiative by the International Energy Agency on wind energy in cold climates.

”In general one can say that, in many of the countries studied, politicians and officials tend to rely on empiric formulas rather than proper risk assessment,”says Andreas Krenn.

”Empiric formulas don’t assess actual risk, and in most cases the risk of ice fall is exaggerated. That tends to put politicians and officials in the clear if something actually happens.”

So you mean that lack of understanding and uncertainty in the minds of officials has a direct effect on safety distances and other safety measures around the turbines?

”Absolutely. I’ll give you an example: in Austria, where I live, a company was given approval to build a turbine in 2009. But a neighbor protested that the risk of ice throw made it impossible for him to carry out his farming duties during the winter. The turbine was dismantled even though a proper risk assessment would probably have shown that the risk to the farmer was minimal.”

What factors are important when calculating the risk of ice throw?

”In cold areas like the Alps you might have 30-40 days a year with icing, which means that you will have up to 20 ice throw events. That would put you at great risk if you lived right under the turbine, but as most of the turbines in the Alps are in sparsely populated areas the risk of somebody getting hurt is still low.”

Can you see a pattern in how authorities in different countries assess risk?

”Countries like Austria – with a lot of snow and ice, and experience of ice fall from structures – have more detailed regulations than e.g. the United Kingdom.”

And what about assessment in China?

”China is always good for a surprise or two. I’ll present the detailed results in my talk at Winterwind.”