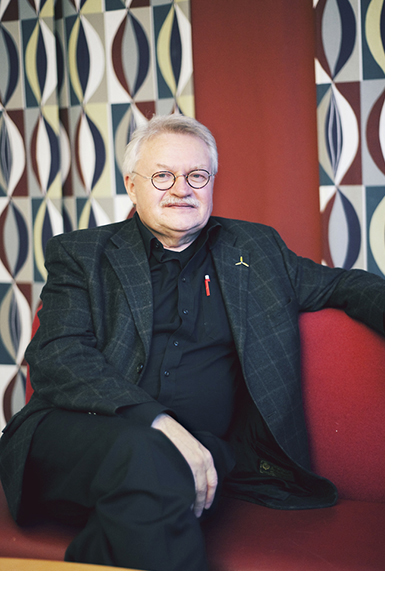 The veteran Jos Beurskens is challenging the Swedish wind power industry: Devise your own technical solutions instead of waiting for the big industrial players to grasp the potential of cold climate wind energy.

But, he emphasises, don’t forget to look beyond low temperature when working on your problem solutions.

Jos Beurskens is very charismatic and undeniably likeable. Although short and greying, Jos has great presence and boundless enthusiasm. He will be researching wind energy for a few more years, but has already decided where he’s heading next.
– Then I am going to carry on with my work on energy solutions for among others the Third World. The striking thing is that there are very few technical applications being developed specifically for this market, because it is so poor.

Jos intends to also work on the use of wind energy for water supply. Water is the primary human need, which is why he is so eager to develop robust and affordable pumps. And wind power is a possible solution.

His commitment to international solidarity and environmentally sustainable solutions is no accident. Jos Beurskens is a child of his time: His academic studies coincided with the turbulent times of the 1968 student protests.
– We were critical of the consumer society. As engineers, we thought a great deal about how we were putting the future of our children at risk by promoting increasing consumption. It was at this time that I started to work on renewable energy.

Wind energy quickly became the main focus, although Jos had other fields of interest, including solar and biomass energy. Above all, the potential of wind energy captured his interest. By the time the sixties gave way to the seventies he was starting to work on wind power generation, along with two other students and a supervisor. This group produced a report, Windenergie, in 1972, just as the energy crisis hit.

– And so it transpired that our little group was the sole source of wind power expertise in Holland. Suddenly we were on TV and giving lectures to government ministers etc. I would have been about 27 years old. On our part, it was more a question of luck than judgement. But, he adds enthusiastically, it was a fantastic experience.

In Charge Of Renewable Energy

His professional career began to gather pace when he was appointed project leader of a government-financed national wind energy programme. He then moved on to ECN, the Energy Research Centre of the Netherlands. For many years he was head of both the renewable energy and wind energy departments, and was in charge of the wind energy programme. Five years ago Jos decided to return to research as a senior scientific advisor, where he is now rounding off his professional career. For all these years he has remained a strong believer in wind energy, and now he senses an increasing financial interest, which should get the market moving.

In 2011 Jos delivered both the opening and the closing addresses for the Winterwind conference in Umeå. He saw the fact that the number of Winterwind participants had doubled since his first attendance as a clear expression of increasing industry interest.

But rapid, competent and effective solutions to the technical challenges facing the wind energy sector require a much broader perspective than is evident today.
He quoted the example of Sweden’s need to develop cold climate wind power generation.

– One must think beyond the extreme Nordic problems of icing. Microclimates exist in many places. Just a couple of cold days can lead to icing that reduces wind turbine efficiency. And the effect is greater than you might think!

Jos points out that even Texas and the UK are wrestling with these problems, which often occur in conjunction with other external factors, such as salt-laden air, large variations in wind speed, dry air, damp air, sand, precipitation, seawater and erosion.
– Many are not aware that the winds in certain areas of Norway for instance are extreme and that turbulence is a greater problem for wind turbines than extreme cold.

Jos emphasises that these factors must all be taken into account if we are to exploit the potential of wind power to the full.
– There are many criteria to consider. When we sent humans into outer space, we took on the challenge and did what was needed. So why not now?

But he dismisses as futile the belief that the few countries where “extreme” cold climate is the major challenge can wait for the big power industry players to prioritise and develop workable solutions.
– This is a challenge that you Swedes need to tackle yourselves! You now have the opportunity to develop a domestic market with great industrial potential. Being able to test new products locally is a winning concept. Even when exports are the ultimate aim. Seize the day! This is an unmissable opportunity.

The common ground is more relevant – the knowledge we can gain when we see the shared potential, and the shared problems with transport, transmission grids etc.

Jos Beurskens has enjoyed the journey through his working life.
– We were part of something unique. From the birth of a new technology to an established core industry. The next stage will build upon existing companies and methods. They have different challenges to face.

The next generation will add new perspectives and develop economies of scale with the ultimate aim of achieving 100% renewable energy production. And then the issues of finance, transmission grids, politics and, not least, public acceptance will loom large.
– It is easy to become introspective if the sector only promotes wind power as something that will benefit future generations. Wind power is, of course, an excellent source of renewable energy. But we should not forget that it is a technology that affects people.

Different wind power solutions are needed if EU goals are to be attained. Jos Beurskens foresees an installation boom within a few years, especially offshore in Germany and the UK.
– Those of us who were there from the start were possibly a little naive. I have never made a penny profit out of owning wind turbines. So I am probably a lot poorer than those who made the smart deals. But I have had a lot more fun!

Name: Joseph “Jos” Beurskens
Age: 63
Lives in: Schagen, North Holland
Position: Independent consultant and among other senior scientific advisor at the Energy Research Centre of the Netherlands
Qualifications: Physics engineering, with a focus on fluid dynamics, at the University of Eindhoven
Family: Wife, a son of 37 and a daughter of 33
Honours: Honorary doctorate from the University of Oldenburg in Germany and the Poul La Cour Prize from EWEA
Special interest: Energy solutions for the Third World