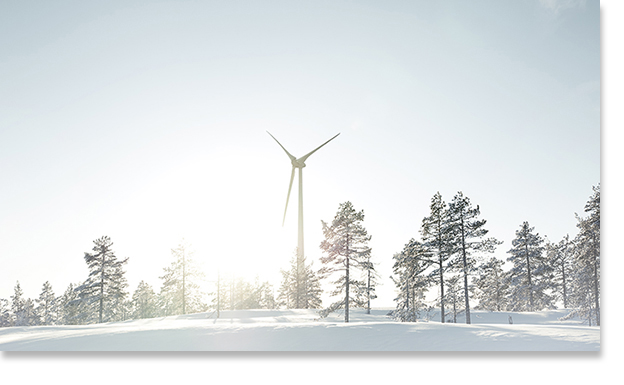 Put simply, blade heating on wind turbines is cost effective. That is the result of last year’s study at the Uljabuouda wind farm in northern Sweden.

The tests conducted during the ice season, between November and March, showed that the amount of energy produced by the turbines increased when the blades were heated.  This was in comparison with the test base of blades that remained unprotected from the cold and significantly there was a net gain when comparing the value of the additional energy created against the additional cost of heating the blades.

The wind park is a pilot project for testing wind power in cold climates and all of the WinWinD 3 MW turbines at the park are equipped with anti-icing technology.  For some people, the positive results from last year would be enough of an achievement, but not wanting to rest on their laurels, the team will carry out further tests this winter to find new and innovative ways to prevent the uninvited guest, ice, from spoiling the party.

“The de-icing solution available on Uljabuouda gives the desired effect when it is in operation, however, there are many parameters involved in the control of the system which affect the operational safety. A simpler solution will eventually be tested on a turbine this winter”, says Sundström.

To prevent the build up of ice first you have to understand how it interacts with the blades. Measurements, calculations and data models are useful tools to allow analysis but Jonas Sundström and his colleagues have taken it a step further, ”This winter, we will be assembling cameras in order to get a visual overview of what the ice looks like on the blades”.

Another new technique being pioneered by the team is that of sound.  Not satisfied with simply seeing the impact of their tests on the ice, the team of experts will also be monitoring the sound of the ice forming and melting.  This will allow for a more holistic view of the effectiveness of their methods on the ice. All of these procedures combined will allow for a greater understanding of the issues, which will in turn, lead to new solutions and leave the ice out in the cold.