Good news for wind sites in cold climate: new research shows that you might be able to squeeze in some more power in existing grids.

Researchers at VTT Technical Research Centre of Finland points out that the colder weather and stronger winds at wind farms in the north can give the local grid more capacity.

– That in turn means that in Arctic areas it’s possible to build bigger wind farms, says Sanna Uski-Joutsenvuo at VTT. 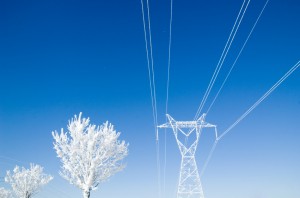 Power lines elongate and contract according to conductor temperature. The temperature is depending on ambient temperature wind (perpendicular to conductor), solar radiation and current flowing on the conductor.

– Warmer weather and higher power transmission on the power line increases the conductor temperature, which elongates the line. The lower the line is sagging towards the ground, the less effect you can transmit in the grid, because of safty regulations.

Usually, grid operators use static line ratings (2-3 seasonal ratings, or even just a single one) to define the maximum allowed current on the line.

But wind farms in cold climate probably have lower ambient temperatures and more wind than the static rating uses for the safety calculations.

– That means the cooling of the lines is greater, sagging is less and the therefore the possible transmission capacity larger, notes the Finnish researchers.

This is not a small deal for sites in distant locations, where the grid connections might be weak.